A newly installed ramp at the courthouse. Credit: Meri Bekeshova / UNDP in Kyrgyzstan

Kara-Suu district courthouse building in Osh oblast now has a ramp and handrails. Entrance steps were renovated and equipped with comfortable ramp and railings, while the staircase was enlarged in compliance with building codes and regulations of the Kyrgyz Republic.

The renovation was carried out by the Osh Judicial Department and local courts as part of UNDP’s project “Widening access to justice the KR” supported by the Ministry of Foreign Affairs of Finland. The project aims to widen access to formal justice institution for persons with physical disabilities and limited mobility. Similar renovations took place in buildings of  Nookat district court, Osh oblast, and Oktyabr district court in Bishkek.

According to Maynaev Kamilzhan, head of Sezim public foundation, creating an accessible environment in courthouses widens capacities of people with disabilities in protection of their legal rights. “Most of them refuse to fight for their rights in courts, anticipating obstacles, as they constantly have to be accompanied by someone. These conditions make person deprived of rights” says Mr. Maynaev.

Previously, visitors, especially women with young children, elders, people with disabilities and limited mobility had been complaining that obstacles began from the main entrance of Kara-Suu district court.

“Customers are satisfied with the changes of courthouse infrastructure. Elders, women with children, and people with disabilities come to us to express gratitude for the convenient conditions created in the courthouse” says head of Kara-Suu district court chancellery Baltabaeva Marapat. 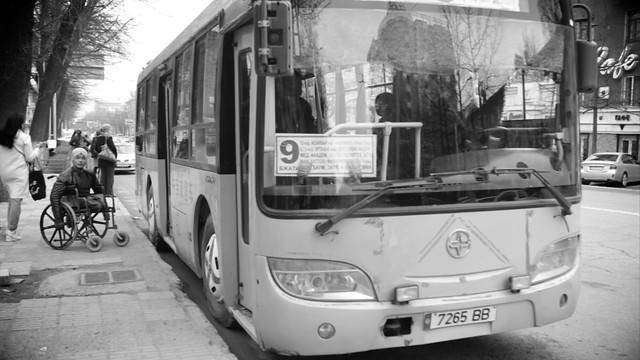 On November 2014 MPs conducted monitoring of courthouses in Osh and Chui oblasts to check their accessibility for people with disabilities in accordance with 52 parameters. Monitoring results revealed that current judicial system is mostly inaccessible for persons with disabilities.

According to the report based on this monitoring, only two courts have ramps. All other courts have no external and/or internal ramps; none of all courthouses have special toilet cabins for visitors with limited mobility. Court services like chancellery, archive in most courthouses are located on the second or third floors, while neither of them have tactile signs with the numbers of floors. The height of the reception desks in departments varies from 75 to 122cm; the system of tactile, audio and visual information are not available in all court buildings.

In general, 90% of courthouses of the local courts do not meet the standards for local court offices. All courts are situated in buildings that are not designed for judicial institutions. Only 20.3% of the buildings have necessary utilities (central heating, water supply). The court buildings do not meet the requirements for administration of justice. Despite the fact that in 2012 the Judicial Department required 65.7 million soms as 90% of court buildings need modernization, only 23.6 million soms (or 36%) were approved for capital investment.

As a result, people with disabilities rarely take part in trials. Their interests are represented by lawyers, guardians, relatives or representatives who claim to court, because person with a disability cannot participate due to physical limitations.

In this regard on December 29, 2014 Parliament Committee on Human Rights, Constitutional Legislation and State Building tasked the Government to ensure implementation regulations in designing and construction of administrative and residential buildings for people with disabilities; to develop and submit for consideration a bill on approving of building regulations for administrative and residential buildings. Moreover, the General Prosecutor’s Office was tasked to carry out supervision over state structures on compliance with current legislation on rights and freedoms of people with disabilities, while Ombudsman was asked to oversee realization of rights on accessing to administrative and residential buildings. In addition, the Parliament Committee requested the Council of Judges to include to budget funds in 2016 for construction of new court buildings and adapting them for needs of people with disabilities.

Language of the site